The meeting of wolves at the genetic junction in Central Europe

The number of wolves is increasing in Europe and, consequently, in Czechia. Thanks to its central geographic position, Czechia further facilitates the interconnecting of wolf populations. A scientific research has been carried out of contemporary grey wolf population structure in Central Europe by, among others, associate professor Pavel Hulva and his students at the Department of Biology and Ecology of the Faculty of Science, University of Ostrava.

The results of this research have just been published in Diversity and Distributions, a scientific journal targeted at biogeography and ecology.

The results show that there is contact of several wolf populations in Czechia that are adapted to various environmental conditions or ecotypes. However, there is also a gradient in the environmental characteristics as a consequence of anthropogenic landscape fragmentation. Using genetic methods for the first time, the study proved a recent presence of wolf in Czechia, in many regions often after centuries of absence.

Thanks to its position, Central Europe is a junction of various genetic lines of organisms as well as cultural influences. That is also true for grey wolf. Although having been wiped out in many zones of Europe, this beast has returned to some of the areas in the last decades, which arouses the curiosity of scientists and emotions of the public. At present, wolves of several populations can be seen in Central Europe. However, detailed information has so far been missing on mainly the Carpathian population and the state of wolf populations in Czechia. The Carpathian population belongs to the biggest wolf populations in Europe; yet it is represented very sporadically in Czechia, namely in the zone of the Beskydy Mts (including the male wolf killed on D1 Highway in the Vysočina Region in spring 2017). Relatively numerous populations can however be found in Slovakia, Ukraine and Romania. The so-called Central European Lowland population comes from the Baltic Sea Region from where it has colonised the lowlands of Poland and Germany and it has appeared in the north of Czechia in the last decade. The south of Czechia has reported the occurrence of wolves from the Alpine and Balkan populations.

It was proved that the genetic architecture of the Carpathian population had strongly been affected by population bottleneck or, in other words, a drastic decrease in the size of the population due to human genocide in the twentieth century when the wolves only survived in eastern Slovakia and in small groups in the mountains of central Slovakia. Later, the state of the wolf populations in Slovakia slightly improved and they subsequently interconnected, most likely even thanks to species protection or the phenomenon of ‘forest transition’, i.e. conversion of former pastures in higher altitudes into forests. However, even today we can observe subpopulation differentiation in the Carpathians due to isolation of individual mountain ranges increased by anthropogenic barriers in populated valleys (e.g. Slovakian D1 Highway). Wolves in eastern Slovakia are then similar to original populations from central Carpathians, e.g. from Romania. The Carpathian population is characterised by unique genetic features; it bares the mitochondrial DNA not existing in the North America any more, but typical of robust wolves of that area in the Ice Age that specialised in hunting big mammals such as horses or bison. Carpathian wolves also have characteristic morphology (e.g. a bigger skull if compared with the neighbouring populations) and archaic food specialisation in male deer hunt. Along with population stagnation, this predisposes the wolves to be the target of nature protection.

Unlike the Carpathian wolves, Central European Lowland population including the North Bohemian animals has a simpler genetic structure. The large number of this population is slightly increasing, which may be related to their ability to adapt to densely populated landscape with year-round protection. What was surprising for the scientists was a discovery of small enclaves of lowland wolves in the centre of the Carpathians. Czechia and its vicinity has then a potential for further interconnecting of wolf populations, namely thanks to its central geographic position. This can however be affected by adaptations of individual ecotypes and anthropogenic factors.

The publication was produced by scientists from numerous institutions based in four Central European countries led by the molecular ecologists Pavel Hulva from the Charles University and University of Ostrava and Barbora Černá Bolfíková from the Czech University of Life Sciences Prague. The study could be conducted thanks to more-than-a-decade-long monitoring of this attractive species organised by Miroslav Kutal from the Hnutí Duha environmental organisation and the Institute of Forest Ecology of the Mendel University in Brno in Czechia, while in Slovakia by Vladislav Antal from the State Nature Conservancy of the Slovak Republic. The study also presents the integration of the methods applied in genetics with geographic methods provided by the team of Dušan Romportl from the Charles University. The study is related to the origins of the cooperation of several central European countries which makes it possible for the authors to study of the origin of individual wolves and to compare their genetic profiles with those of the neighbouring countries such as Germany, Poland and Slovakia. 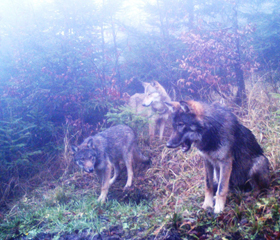 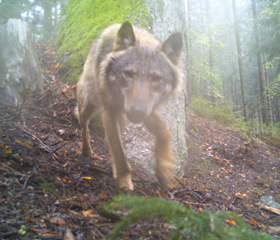